Research process within the exhibition #MemoriaEsBaluard

Delve into the history of the immediate physical context in the Sant Pere bastion with this testimonial collection of people who are neighbours or linked to the neighbourhoods near the Museum. The voices that we make available to the public present a history that is still alive in one of the most emblematic areas of Palma.

The interviews allow us to learn about diverse aspects of our immediate historical context such as the transformation of the neighbourhood, the use made of the barracks, stories from the times of the Civil War, or the 1963 explosion that destroyed part of the wall. They also contain reflections on the neighbourhood’s current situation and the changes in the ways of life and social interaction of contemporary society with respect to external dangers.

In this manner, we extend the exhibition’s scope to include the life experiences and thoughts of people who have been part of the neighbourhood that has always pivoted between internal and external aspects of history. 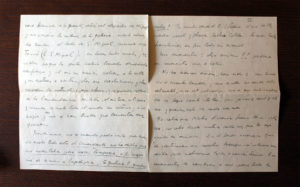 [Manuel Aguilera reading a letter from Gabriel Fuster Mayans to his fiancée, hand-written at the military barracks de Sant Pere on 29 July 1936]. “Deep down, I recognize that if this went on for a long time, if we come out alive, we will all go mad or become neurotics[.] These times change one for the rest of one’s life: one becomes indifferent and at the same time, optimistic, and stays calm [sic]. When you’ve seen death close-up, you will understand what I am saying; one gets used to the danger so much that without it, it is terribly boring”. 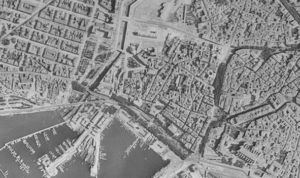 “Sometimes people would go off the rails when they heard the siren […] Normally, a shelter should give onto two streets, that is to say, have two exits. And sometimes the exits were so near one another that, had we had the misfortune of a bomb falling, it would have buried us all”. 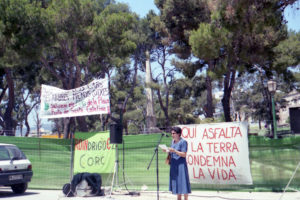 “For us, it was a special plaza. There was no other earthen plaza […] We were fighting very consciously, because this heritage belongs to everyone”. 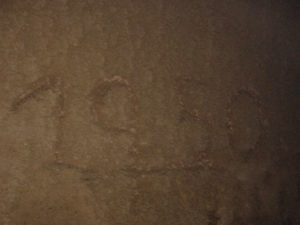 “When we went down into the cistern, well, we were all very surprised at what we found […] It was fairly abandoned, and everything was thrown in there; if something were robbed, it would end up there […] There was graffiti of the soldiers, who likely went down into the well with a rope and had drawn their name and the year”. 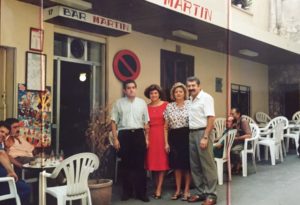 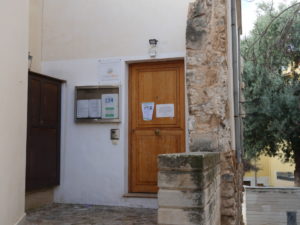 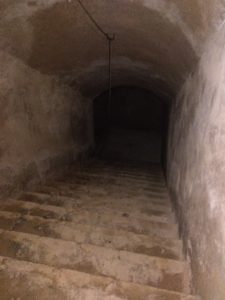 “Those who ask me what these shelters were like are surprised to learn that they were basically very simple; there was no common room, it was a very simple narrow gallery”. 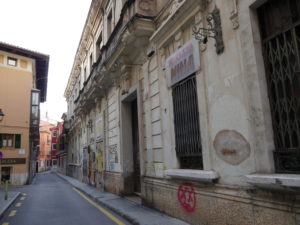 “I still have clients who were young women when they came to the first salon”. 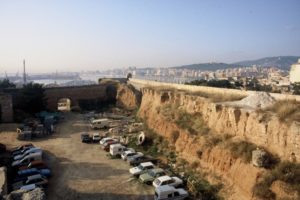 [Speaking of the bastion of Sant Pere] “As adults, we prepared the floats for the procession of the day of the Three Kings, because it was very spacious”. 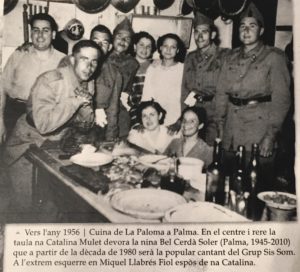 “Many soldiers went to the La Paloma tavern. Because it was a typical post-war tavern. They served popular dishes that were filling and cheap. Because their clientele consisted of people of very modest means. People went hungry at the time. What people wanted was a filling meal”. 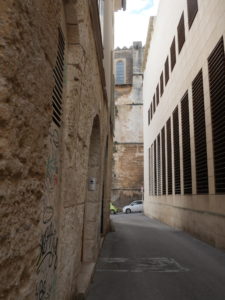 “We are the ones that built the great walls, the way we live. And what’s  more, these large community areas are not fomented […] The problem is that there is no participation, people don’t participate. There is nobody to blame, because… Because that is how it is […] Individualism looms large”. 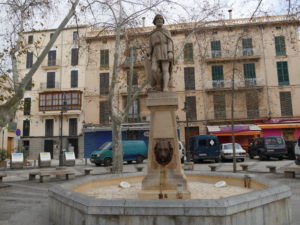 “It is a neighbourhood that suffered several epidemics at the end of the nineteenth century […] Epidemics would start here because sailors arrived from elsewhere with someone sick among them; they would be infectious, and one of the first places in Palma where there was an epidemic was Puig de Sant Pere, in this area, next to the Shipyards”.

“The little seaplanes from Pollença, that the Germans and the Italians had, would go down to El Jonquet and go over what was the Jaume I building, almost touching it. And they would fly lower than the top of the wall, at the heigh of our balcony. So much so that we would come out to see them descend”. 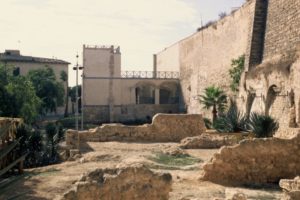 “In 1963, The Palma Plan General allowed to build an exceptional building here [in the bastion of Sant Pere] […] They wanted to isolate the bastion from the poor neighbourhood and create a green area here [in the environs of Carrer de la Pólvora], an area to isolate the ‘special regime’ zone from the poor neighbourhood. Although it had more to do with speculation than with defence”.

We recommend listening to the interview accompanied by the following images: