A banner with the word MUSEU was placed on the facade of Es Baluard on October 20, 2015, the date on which we inaugurated the second revision of the museum’s collection. This banner named and marked the main building of the museum of modern and contemporary art in Palma but also symbolized the debate around the real meaning of a museum today. It functioned as a manifestation, a way of making visible this issue, a gesture of vindication.

Moreover, «Museu» was launched as a horizontality device generated by Es Baluard with the aim of becoming a means of dialogue and debate around these cultural infrastructures, involving the professional sector (and by extension its areas of training and management), museum audiences, and institutions from the private and the public sectors of nowadays society. It took the form of a blog in order to collect and boost positions and commitments, from the written to the visual. 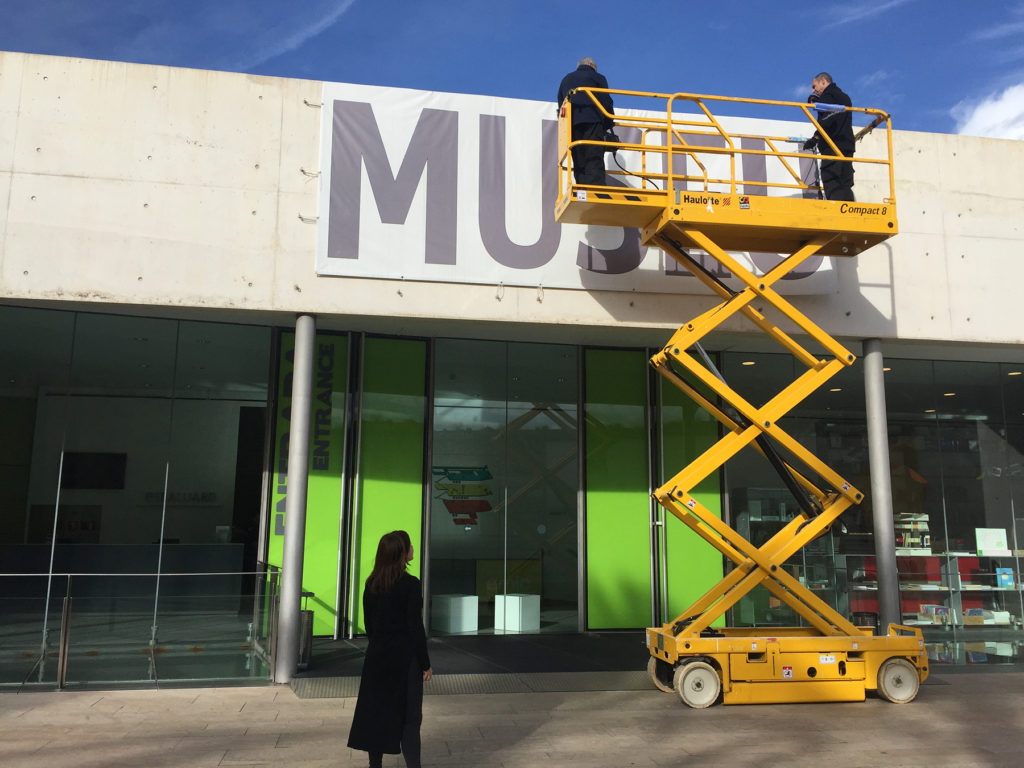 A museum is an agora, a platform for physical transits and virtual wanderings. With this blog we intend to generate an open meeting place for analysis and inquiries with an ontological and function related character.

One of the main goals is to discuss the reality of the physical and the possible obsolescence of the concept «Museum» today. For this purpose, we have collaborated with different entities such as IAC (Institute of Contemporary Art), ICOM Spain, ADACE (Association of Contemporary Art Directors of Spain) and different professionals who have been involved little by little in the project and whose texts and reflections have been activating the blog since 2016. In 2019 we will collaborate with different universities with the aim of involving renowned teachers and their students into the project, giving to «Museu», also, a training and formative dimension.

The main part of the project consists of main entries, the texts being signed by the professionals who participate and will be participating in the near future.

It consists of an area where the texts being sent are published, writings which will follow different lines of thought and reflection.

Glossary to debate: we are interested in delving into a series of terms that, because of being default or outdated, require a reinterpretation and contemporary analysis.

Archive: we collect essential and key documents that can be useful for research purposes and act as supporting lines for different training sectors.

«Museu» is a project by Es Baluard Museu d’Art Modern i Contemporani de Palma. Since its origins it has been directed by Nekane Aramburu. In 2017, it was coordinated by Semiramis González and in 2019 the Universitat de les Illes Balears (UIB) is implicated on it, specifically, with students of the Art History degree, under the coordination and supervision of professor Francisco Falero. The Universidad de Zaragoza collaborates also and in particular with professor Jesús Pedro Lorente.