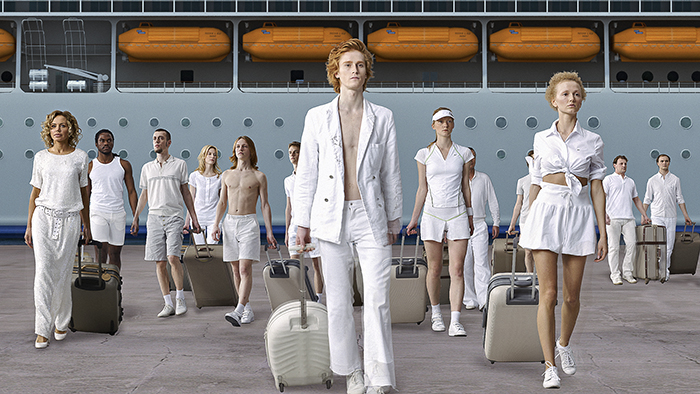 AES+F. The Feast of Trimalchio

Every summer Es Baluard invites an international artist to present a thematic project in the Aljub space; thus, after the Swiss artist Thomas Hirschhorn, in 2017, a year when we are focusing on currents and transformations of the phenomenon of tourism, it is the Russian collective AES+F, comprised of Tatiana Arzamasova (1955), Lev Evzovich (1958), Evgeny Svyatsky (1957) and Vladimir Fridkes (1956) who bring one of their most complex works to Mallorca, situated between hyperrealism and the fantastic, the seductive and the critical: The Feast of Trimalchio.

A videographic work in 3D as a spectacular, excessive interpretation of the feast of Trimalchio based on an imaginary island that houses a luxury resort where all possible landscapes are found, like a kind of paying paradise with architecture reminiscent of landmarks of classical painting. The guests that land on it encounter a human ecosystem of assorted cultures and races where guests and hosts, servers and served are immersed in a role play and pursuit of pleasures somewhere between the tragic and the absurd. In The Feast of Trimalchio ideology, history and ethics converge in a utopian setting, considered from a surrealist, extreme perspective based on the combination of pleasure and leisure with hyper-consumerism.

Trimalchio is the name of a character from the Roman work of fiction Satyricon by Petronius, an arrogant former slave who becomes rich and appears in the part entitled “Cena Trimalchionis” (“Banquet of Trimalchio”, often translated as “Dinner with Trimalchio”). Like a Jay Gatsby in his excessive parties, the absence of the same situates the spectator in the choreography between the members of this strange resort anchored in an imprecise time where anything is possible.
This group of artists has been working together since the late ‘eighties and their work is characterised by the use of digital effects and high-technology treatment mixing languages of advertising, popular culture, the most famous myths or classical painting, to pose different questions on contemporary society where violence, war or the drift towards mass consumerism are some of the problems set forth.

For the first time in a museum institution in Spain, Es Baluard presents an individual exhibition dedicated to the Russian collective AES+F.  In addition, the exhibition coincides with the collective display “Ciutat de vacances”,a production that is similarly complex and multifaceted based on the subject of tourism.