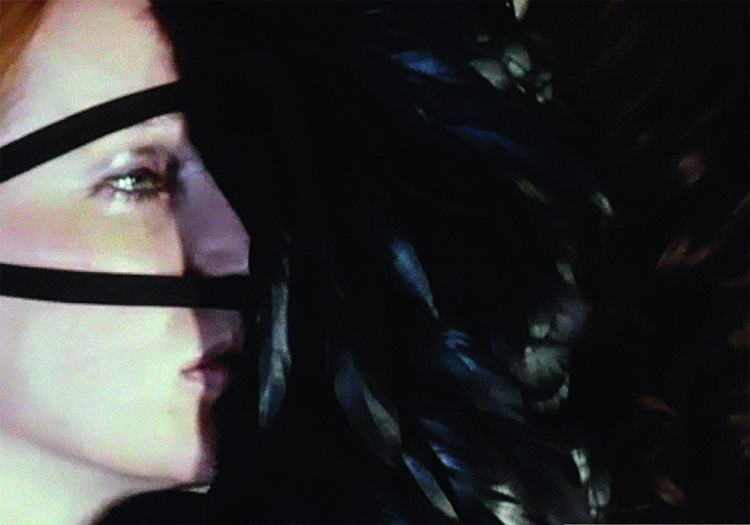 Rebecca Horn, (Michelstadt, 1944), a German artist present in the Es Baluard collection through two works, Three Graces in Blue, 1993 and La Ferdinanda X-Ray, 1981, is a visual creator with a lengthy career in the development of installations with links to technology, interactive performances and film production.

With this review of her audiovisual works in the Gabinet space, we aim to come closer to her pieces linked to the moving image, a route she embarked on in the early ‘70s with a language of her own, one of metaphysical references.

The allusions to sex, desire, the body, and also things intuitive and scientific in conjunction with her peculiar way of including poetical and literary references, are a constant theme in these works.

Inspired by American underground film, her exploration of the audiovisual also contains implicit literary references to Kafka, Joyce and Faulkner, to the Beat Generation, to T. S. Eliot and Sylvia Plath, revisited classics and her own texts.

The use of mechanical elements, hitherto-unpublished and fragile materials in her installations, and the transdisciplinarity of her language has led her to collaborate with artists like Jannis Kounellis, Sven Nykvist, with the actors Donald Sutherland, Geraldine Chaplin and Martin Wuttke, and with the German writer Martin Mosebach or the musician Hayden Chisholm.

She made her first film in 1970, a short lasting 12 minutes, based on the performance Einhorn (Unicorn), the sculpture for which now forms part of the collection of the Tate Modern in London. In general, her work is characterised by a convergence of performances, films, sculptures and spatial installations, drawings, photographs and a special treatment of the sound-related and the relationship of bodies in space. This was the period when she used prosthetic accessories and extensions in her performances which she then turned into films, representations in which she explored this equilibrium between body and space which then evolved, and would give rise to an interaction between her mechanical sculptures where the actors perform the role of dysfunctional machines. Their parts would evolve based on the idea of defining and cutting distances using reflections of mirrors, light and sound, including her characteristic allusions to the impossibility of movement, lack of communication and the relationship with things spatial as a metaphor.

Horn conceived her first full-length film in 1978, Der Eintänzer (The Gigolo), and it was followed by La Ferdinanda: Sonate für eine Medici-Villa (La Ferdinanda: Sonata for a Medicci Villa), 1981 and Buster’s Bedroom, 1990; these are very narrative-based films in which the artist’s obsession with the imperfection of the body and the balance between the figure and objects become patently clear.

Rebecca Horn has a particular connection to Mallorca, where she has a second home.