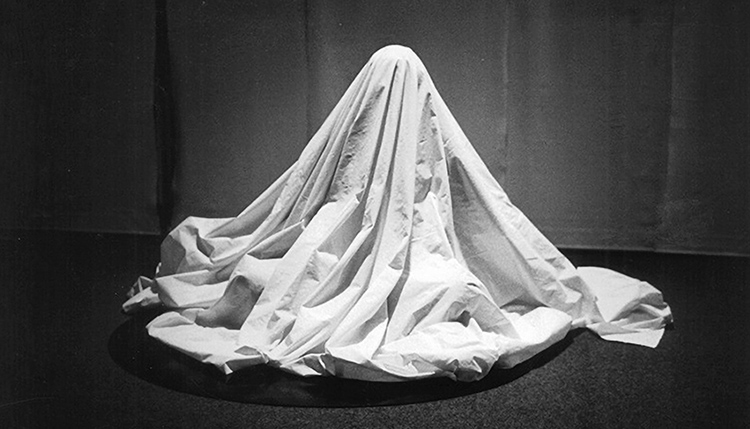 The exhibition “The Vertical Knot”, devoted to the artist Jorge Eduardo Eielson (Lima, 1924 – Milan, 2006), offers the chance to examine his artistic output from the end of the fifties to the last works he created. Eielson is one of the most radical visual artists and poets, in the fullest sense of the word, as well as multifaceted, with different ways of questioning the world we live in through a synthesis of graphic pieces and cultural references.

This exhibition project, retrospective in nature and unprecedented in Europe, explores the artist’s relationship with the literary field, especially poetry, and that of visual arts. A fruitful dialogue featuring his thoughts on language. Language taken as a structure in which the symbol points equally to a beginning and an end, language that responds to graphic and visual codes that speak both to reason and to intuition.

Best-known in Latin America for his work as a poet belonging to the so-called Generation of ’50—together with Peruvian literary figures of the stature of poet Blanca Varela or writers Javier Sologuren, Sebastián Salazar Bondy and Julio Ramón Ribeyro—in his self-imposed exile in Europe Jorge Eduardo Eielson developed a complex and ever-changing corpus of artwork, presented in an original dialogue with aspects of Pre-Columbian Peruvian culture, with Andean quipus as a key part of this. The quipus were systems of knotted rope that for over a millennium had been used in the Andes to register information related to accounting, or just as well to narrative. They involve a type of paperless script that combined tactile and visual experience in the codification and de-codification of meanings.

Eielson’s first visual work is grounded in a reflection on landscape, taken to mean the interface in which to open up cracks to understand ways of thinking. He gradually worked on simplification and synthesis, with the quipu acquiring an autonomous presence, in dialogue with colour. The knot would be used as a formula for universal representation, called in metaphorical terms to carry with it the complexities characterising all human societies, taken as a whole.

As the seventies approached, his research led him to conceive of space and how certain elements can inhabit it on the basis of a series of tensions pointing offstage.

Throughout his career, during which he lived mainly in Italy, he kept up a dialogue between pre-Columbian culture and Mediterranean mythology. Through this link between the two cultures, the artist seeks the universal place that unites all human beings, pointing at the stars or space as places where beings, not just human, need to understand and know.

His visual work gained rapid recognition in the seventies, when he was part of the documenta 5, curated by Harald Szeemann, considered one of the most important of the twentieth century, the 72 Venice Biennale and even the Munich Olympics (interrupted by the terrorist attack).