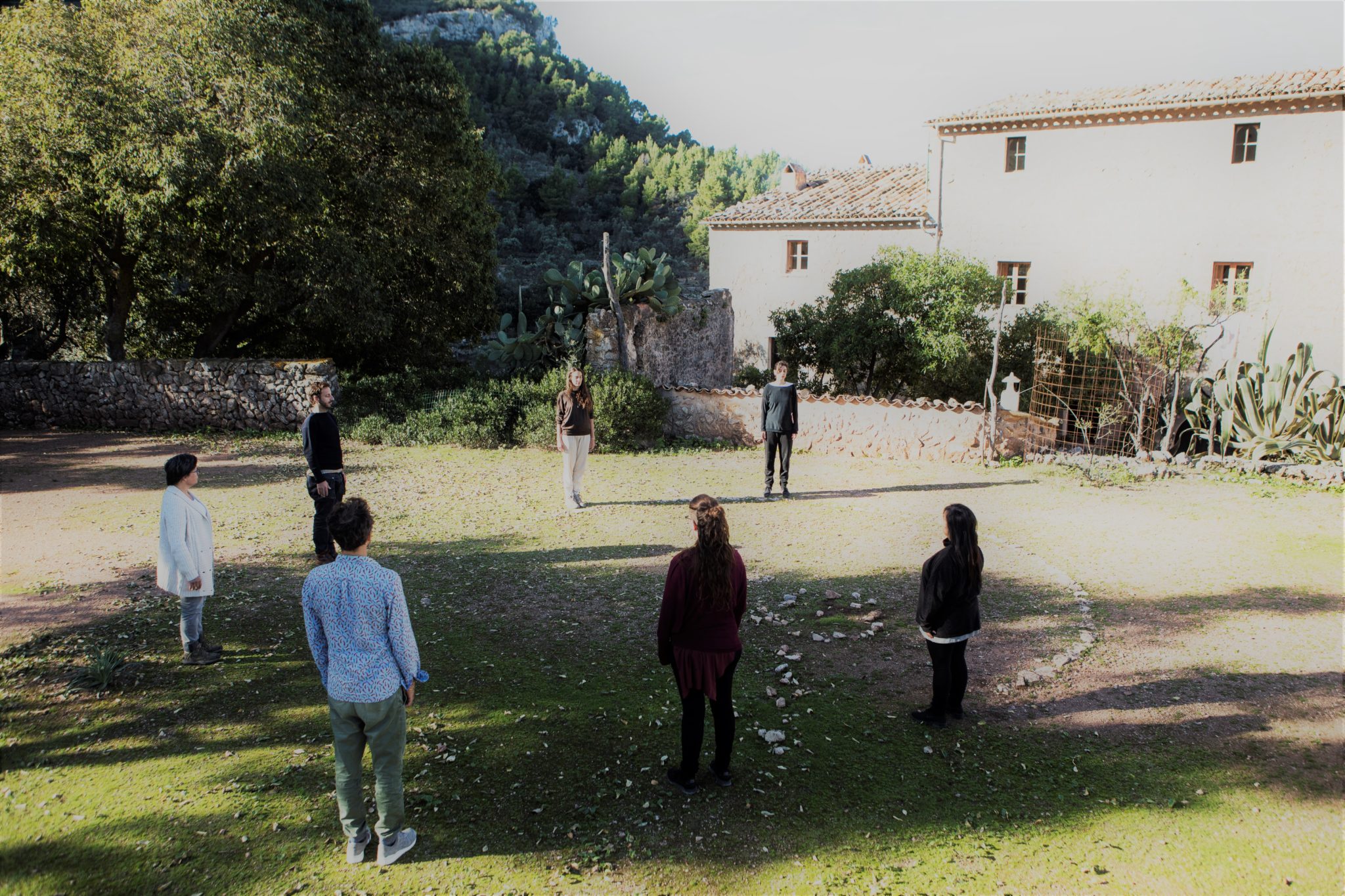 For the second edition of the “Missions artístiques a la Serra de Tramuntana” program, Es Baluard Museu proposed the collective INLAND. And so, after the interdisciplinary workshop framed within their “New Curriculum” methodology, which took place in October of 2018, the collective finally proposed – by way of a conclusion – an installation in the form of a camera obscura, which they prepared on the basis of the interactions between landscape, culture and nature in the region of the Serra de Tramuntana.

The installation revolves around Lluc Mir, head of the guild of Margers (dry stone wallers) an entity which groups together the artisans who make the dry stone walls or marges that are so fundamental in the Serra de Tramuntana for the construction of terraces for the olive groves which for centuries represented practically the only source of income for the local population. Lluc explains the multisensorial knowledge (touching the stone, the sound of it breaking, its appearance and colour) which margers use in a way that is internalised, embodied, an extremely rapid form of operating which goes beyond apparent logic, when they pick up a stone and place it in perfect conjunction with the rest. After several hours, and several days dedicated to building walls, apprentice margers, says Lluc, continue their work in dreams, placing stones and seeing them turn, almost possessed by them.

The importance of maintaining these artisanal and agricultural practices is fundamental in a farming landscape that fights against gravity. As tourism replaces the cultivation of olives, the landscape has been recognised as a UNESCO World Heritage Site, and is gradually being lost.

The project which takes the name of INLAND Tramuntana is framed within the “Missions artístiques a la Serra de Tramuntana”, as a context for pedagogical and informational action organised by Es Baluard Museu and the Consorci Serra de Tramuntana, an entity formed by the Govern de les Illes Balears and the Consell Insular de Mallorca, established after declaration of the Serra Tramuntana as a World Heritage Site by UNESCO.

INLAND was initiated in 2009 by the artist and agroecologist Fernando García Dory, who led the workshop along with Marta Goro. At present INLAND works as a group which provides spaces for collaborations on the land, economies and communities-in-practice as a subsoil for the cultural forms of post-contemporary art. Intervening in multiple forms in different countries, INLAND publishes books, produces exhibitions and makes cheese. They also advise the European Commission on the use of art in rural development policies, at the same time as they facilitate a European movement of shepherds, rehabilitate abandoned villages and promote access to the land in different places, from the perspective of artistic production and collective agriculture.

INLAND has three main work spaces: the Centro de Acercamiento a lo Rural (or Centre for Introduction to Things Rural in Madrid), the INLAND hamlet on the coast of Cantabria and activities in Deià, in Mallorca. Since 2010, it has been involved in Tramuntana, through two main actions: on the one hand, the launch of a craft school, with diverse activities ranging from working with wool, clay and food craft, to the construction of dry stone walls. The aim is to reinvent the trades that have a place and a utility in the present, combining the knowledge of master artisans and contemporary designers and allowing for new, productive jobs for young people who would otherwise depend on the seasonality of tourism, as occurs all over the island. On the other hand, INLAND launched the Adopta un olivo (Adopt an olive tree) project, as a form of complicity between visitors to the island and the cultivation and maintenance of the ancient olive trees that are hundreds or even thousands of years old, and which are associated to highly valuable landscapes, but which have a small, uncompetitive economic production. When someone adopts an olive tree in exchange for an annual fee, the tree is given their name and the adopter is informed about the care and treatment it receives. The collective has been presented at the Istanbul Biennial (2015), Casco Art Projects, Netherlands (2015), PAV Torino, Italy (2015) or Maebashi Museum, Japan (2016). In 2017, INLAND was present at CCA Glasgow, MAMM Medellín, MALBA, Argentina, BAU Bolzano, Italy, and FHU, Apulia, Italy.

For 2019, as well as this exhibition, along with the Serpentine Gallery London and Matadero Madrid, INLAND is preparing a seminar and a publication, as well as an exhibition at the Centro G. Pompidou for next October. The group is also immersed in the organisation of a meeting of Latin American art spaces with thing rural, and the meeting of New Curriculum with eight European universities.