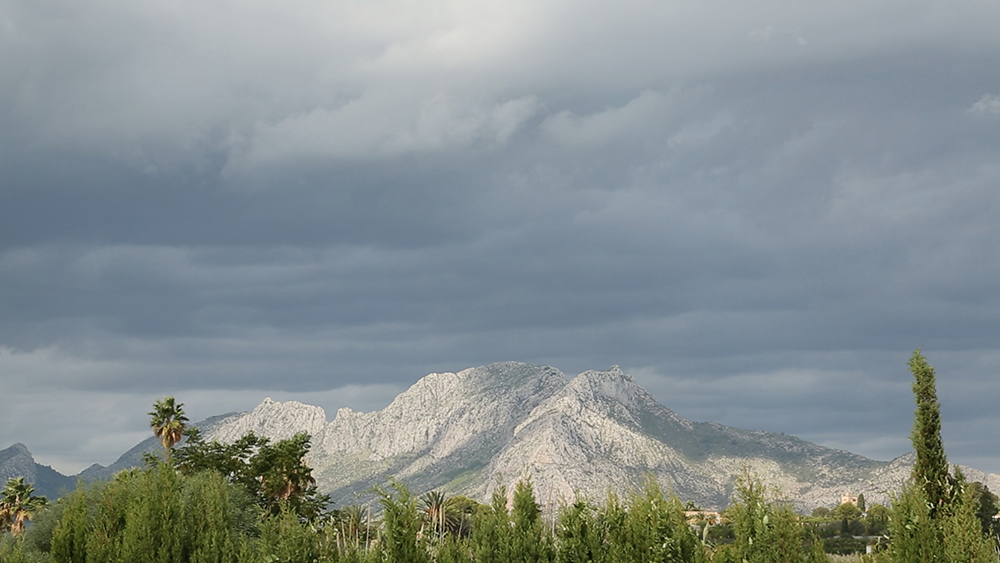 A concatenation of different interior and exterior spaces shot in video take us to a specific time and place. Javier Artero re-appropriates a landscape situating it in the foreground of interest, in order to produce, premised on the polyphony of witness accounts, a single narrative where ellipsis is key to understanding his purpose. The landscape genre was late in acquiring relevance in Art History, moving on from being used as a background in paintings to becoming autonomous after its popularisation in 17th-century Holland.

Nevertheless, landscape as an element of aesthetic appreciation was “invented”, in a sense, thanks to Xie Lingyin (385-433 A. D.), the first landscape poet. It’s very important to understand how in Chinese the term landscape is written by means of two ideographic characters: shanshui which means “mountain” (shan) and “water” (shui), elements of the substance of the Universe; the mountain as a bridge between the divine and the earthly, a shelter for hermits, and water flowing like lifeblood feeding the Tao, symbol of metamorphosis and of everything mutable. Both Chinese characters constitute the main elements of nature, to the extent that they are forms that generate the creation of the world. Thus, we should not be surprised by the capacity of magic attributed to landscape in the first stages of the development of art, due to its connection to these ideograms and the shamanic ceremonies that used them to consult supernatural forces, in a theurgic atmosphere that peaked in China particularly in the 10th century.

The video work proposed by Javier Artero at the Marina Salud Hospital in Denia thanks to an DKV-Es Baluard audiovisual production grant is premised on the notion of the horizontal applied to the vision of the natural or artificial landscape. It is the horizon of the projection of desire, and the path of knowledge for an audience that will gradually reconstruct the hints of the different witness accounts in order to produce the story. The visual and sound recordings made during the artist’s residency in the Hospital allow us to enter the uncertainties of the patient, visitor or professional, linking them to the line of the horizon marked by the spaces surrounding the building. Anguish and deception, certainties and hopes; nothing can go wrong if we have a point to attach our sight to.

The anonymous collective experience we are faced with by the voices of those who accepted to take part in the project tell us about their hospital experience based on two questions posed by the author: what took them to the hospital, and what does their stay at the health institution mean for their future.

Places are impregnated by the energies and memories of those that move through them, they are not only affected by the wear and tear of the passing of time, geomorphological progress, or seasonal changes. Places are that subjective construction that goes beyond what is captured by vision of what takes places on the surface of their skin.

The contemplation of a travelling shot over these panoramas will thus be an exercise in the perception of the awareness of time for each of its protagonists and for every visitor that views them, as a ritual on the present, when it is the only tangible and real thing.

“Nothing like caressing a crescent, a wayside, a difficulty that is not only one of flesh, which doesn’t feel the metallic cloud, which focuses the electricity that we lack”, wrote the poet Vicente Aleixandre in Pasión de la tierra, and we, faced with these ever-so-clean and perfect horizons, imagine and understand.

The work Skyline was made in the Hospital Marina Salud de Denia, with the participation of hemodialysis patients, during the staying of the artist in September of 2015.
Javier Artero (Melilla, 1989)

He has been awarded the 2015 DKV-ES Baluard Scholarship. After graduating in Fine Arts by the University of Málaga (2012), he completes his studies with a scholarship at Passau Universität (Germany). He holds an M.A. in Artistic Production and Research by the University of Barcelona (2014), and is a Ph.D. student at the UMA.

Among his projects are El Periplo (2015), exhibited at ELBUTRÓN (Seville), the Isabel Hurley Gallery (Málaga), at Art@Tell Third Edition at the St. Gallen University (Switzerland) and selected for the I Premio de Arte Joven de Gijón. Likewise, the La disección lúcida (2013) project, developed in Germany and exhibited in the Exhibition Hall of the Fine Arts Faculty in Málaga, has been selected in the contemporary art award D’MENCIA XV in Doña Mencía (Córdoba).

He has also exhibited at Bizkaia Aretoa (Bilbao), at Galería Trama and Sala Parés (Barcelona), at MAD Antequera, CAC Málaga, at the Málaga Film Festival, at the Sala de Exposiciones El Palmeral de las Sorpresas (Málaga), at IKAS ART BILBAO, and at the international video art festival LOOP in Barcelona.

He has received the 2015 ART < 35 production grant, and the INICIARTE grant, amongst others.

His work is in the collections of the Banco Sabadell Foundation, the Doña Mencia Town Council, the UMA Fine Arts Faculty, and the UMA Philosophy and Humanities Faculty.

A project in collaboration with: