Curated by Nekane Aramburu, “Permanent collection” represents the biggest rearrangement of Es Baluard’s funds since the exhibition “Implosió”. All of the works displayed – up to a total of 109 – mark out an itinerary with a chronological base that will plunge visitors into the debates surrounding Modernity and Post-Modernity, on the past future signified by an initiation journey towards new ways of understanding our present. With the aim of completing the proposed review of the museum’s collections, loans of both private and public works have been incorporated. The patrimonial idea of preserving the past in order to propitiate the conservation of material assets and revise the different histories of art and transmit them in real time leads us to analyse and research different lines and currents.

Keys of the exhibition

Different currents have been developing and analysing it from the 1950s on. Thus, the Post-Modern as a term was used extensively after the publication of The Postmodern Condition by Jean-François Lyotard in 1979 and its paradoxes have expanded to the present. What interests us most about this, in this phase of the study of our collections, are the analyses regarding transdisciplinarity in the art-life social vertex and the feminisms of difference.

The Modernity project was formulated in the 18th century by the enlightenment philosophers. Clement Greenberg, the influential theorist and author of Modernist painting refers to Kant as the first true modern, although chronologically speaking modernity corresponds to a period between 1860 and 1930, with symptoms of the abandonment of this paradigm arriving up to the early ‘seventies.

A period that covers the most active time of painter Pilar Montaner (Palma de Mallorca, 1876 – Valldemossa,1961)until 1930, which continued until the death of her daughter Pazzis Sureda (Palma, 1907 – Génova, Mallorca, 1939), a phase that also corresponds to the rise of tourism in Mallorca.

The genealogies of the early vanguards imply ruptures and progress, expanding the limit of the picture and appropriating space and things real. Marcel Duchamp propagated the idea of attributing greater value to the freedom of intelligence than to the creation of great works.

The contamination of forms and processes had been forging with Futurism, Dadaism and Surrealism. A vector of explorations that would lead both to abstraction and to a whole series of artistic trends.

After World War Two, diverse groups begin to stand out in Spain, such as Dau al Set in Catalonia, represented here by Antoni Tàpies, and El Paso in Madrid, with Manolo Millares in painting, and the figure of Pablo Palazuelo in the sculpture of geometric language based on rhythm, number, line and energy. Meanwhile, in the West, the movement against the Vietnam War, May 1968, German reunification and the destabilization of the Soviet Union all affected the new generations of artists, by now immersed in globalisation.

The dissolution of the disciplines, the body as a place for artistic practices and the new corporal strategies affect most of the new creative behaviours. And there is a shift towards procedural art and the so-called relational aesthetics.

Of the pieces on display, we can highlight the use of the incipient video technologies, in the case of Wolf Vostell centred on the television set of the 1960s, and the extension of the performative practices based on the conceptual and carried out for decades by Esther Ferrer, an artist focussed on the vindication of the woman’s body and the subtle analysis of time. Antoni Miralda also works on the base of things conceptual; he is one of the artists who has rebelled against museographic archetypes the most, and the one who has used them the most as a resource from a visual work that rests, to a large extent, on the work in process, the sculpture and the monument, the public space and anything involving participation. The plastic soldiers he began using in 1967 are humorously applied to a replica of Menacing Cupid by Falconet, donated by the Louvre museum.

From the Italian Transvanguardia movement, with Nino Longobardi, key figures from the history of painting and myths are taken up, at the same time as the painting of the German Neo-Expressionists becomes prominent and spreads vigorously.

An obvious facet of the Post-Modern emergence of the painting of the 1980s is reflected by the display of four artists linked to Mallorca: Miquel Barceló, Miguel Ángel Campano, José María Sicilia and Maria Carbonero. In another facet of painting, we find codes, signs and personal quests, outstandingly, on a national level, Juan Uslé and Pep Girbent, and internationally Imi Knoebel and Jason Martin, with a significant reaffirmation of pictorial language and experimentation in media.

In the conference on the “creative act” of 1957 and its so-called “aesthetics of the reception”, Duchamp alludes to the fact that “works are completed by the viewer”. Performative practices, collective participation and creation based on the relational are some of the channels developed by the Democracia group and Joan Morey, whose works reveal to us his interest in approaches committed to the real or to the language of representation based on generating events, mise-en-scènes or specific interventions. Interaction with the public has always been extremely important in the work of Eulàlia Valldosera: the body, self-representation and the light-related are elements that enable her to investigate formal aspects of the artwork, the material and immaterial, something that also concerns Toni Catany, whose photographs have a strong mystic and spiritual connection. Whilst Andreas Huyssen spoke of the future as a new form of frontier, fragmentation and multiplicity –emblems of Post-Modernism – lead to different strategies for naturalisation of the artistic object. The work and evolution of three women with consolidated careers behind them but who continually move forward and engage in research demonstrate this. In an anticipatory fashion, we shall discover three works from different periods by Ana Laura Aláez, Susy Gómez and Amparo Sard. 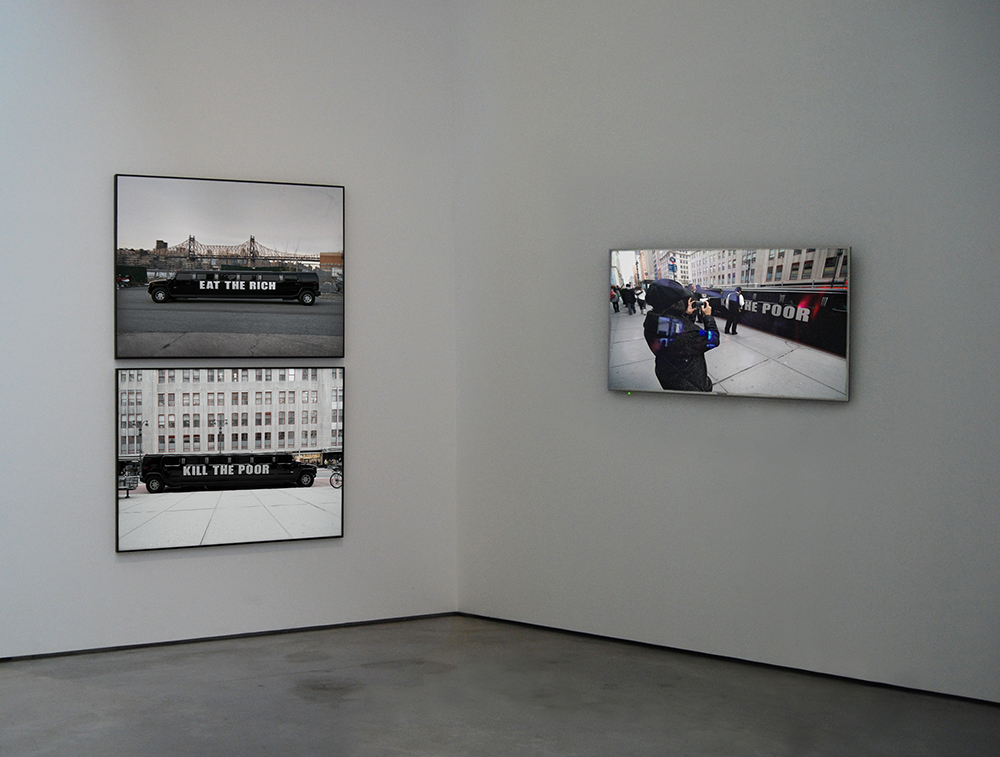 Democracia EAT THE RICH/KILL THE POOR 2010 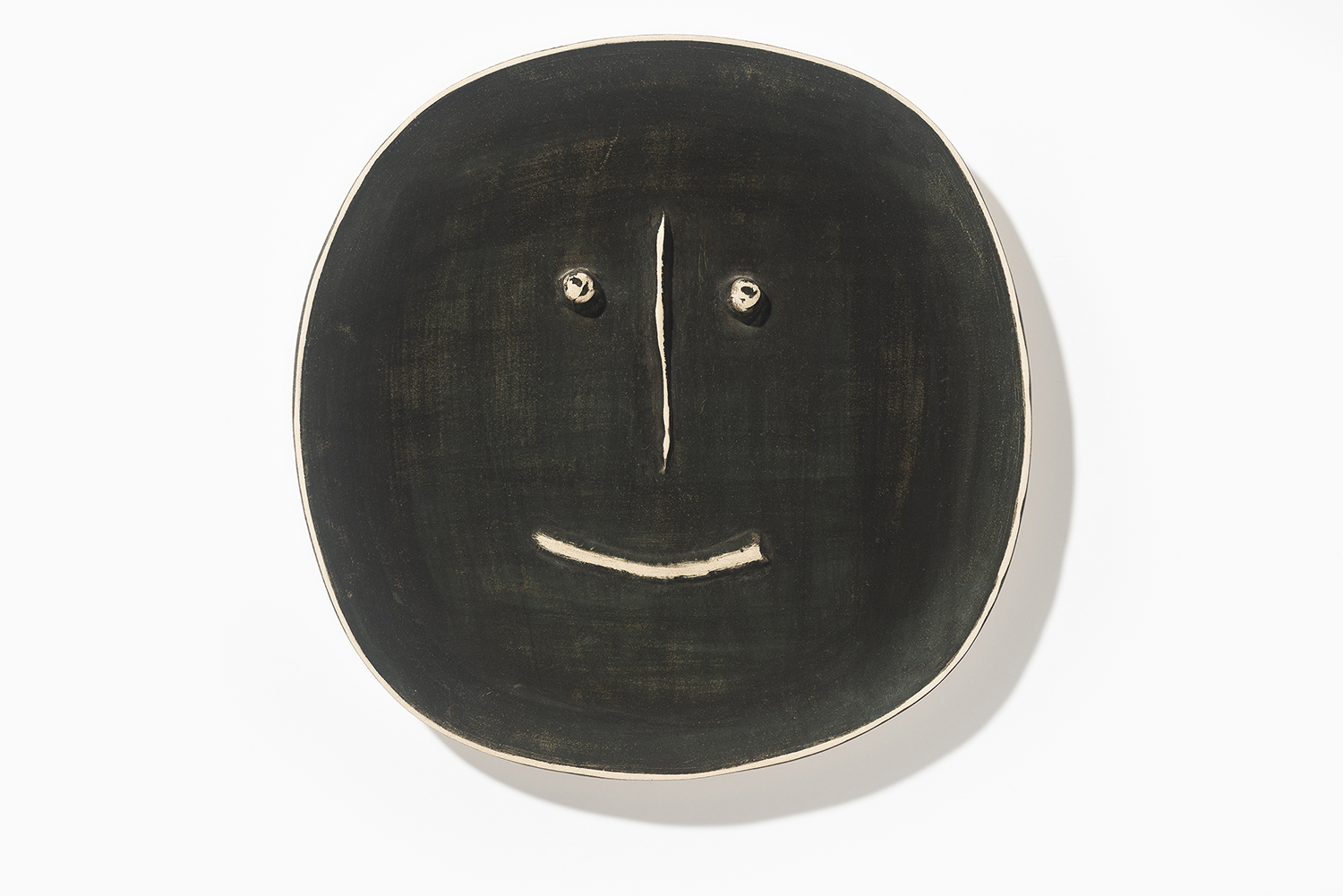