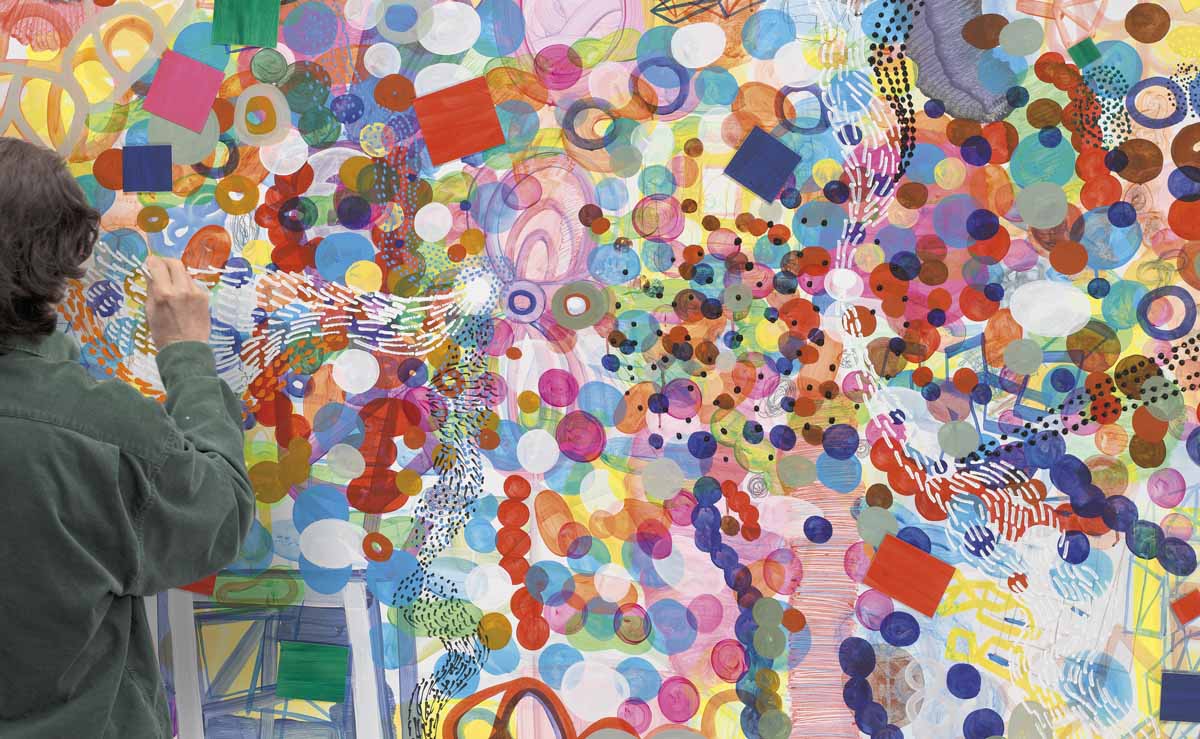 Rafa Forteza (Palma de Mallorca, 1955) is one of the most significant artists for understanding the progression of painting in Spain over the last few decades and this exhibition shows how he condemned himself to leading different syntactic expressions towards the same place, projecting an interstitial space that houses frictions and discontinuities in media such as painting, drawing, engraving, sculpture and the installation.
In the exhibition, Es Baluard’s display space works like an artist’s studio, showing a series of pieces representative of his work from the early ‘nineties to the present, but also a way of creating born of an inner need which acts as a characteristic of formally different works, as their guiding thread. Thus, the title of the display, El tremolor de la màscara (The quivering of the mask), was taken from words dedicated to the artist by Antonio Saura, and attempts to signal that idea of painting and art as something that hides but expresses itself in definite terms, something that emerges but contains itself as an enigma, which characterises all of Rafa Forteza’s work.

In his most recent works Rafa Forteza acts from the Babylonian scream of colour, but the abysmal sensation is the same one present in the more silent, chromatically austere works that characterise his nineteen-nineties. Rather like the jazz music that gives off another symbiotic conjunction non-stop inside his studio, this is a melodious, music, harmonious abyss. The original subject matter of all these disciplines is the same, a dark, unknown matter which we cannot guess at correctly. Which is why the montage of this exhibition is conceived as the antechamber to an enigma: that of the artist in his studio. The artist’s studio, as this display shows, is simultaneously a fluid path and a quivering space full of objects that end up being decorporealized in a common whole thanks to their full integration into that space. The disintegration of the shapes by the atomisation of colour is something that is also present in his paintings. The image is consumed and space, like the picture, declines by way of a convulsed surface, like a topography of errant, fluid, glutted, liquid signs.

In the painting of Rafa Forteza the images slide, crystallise on the surface. The prior exploration and his way of working empathetically with the interior of the surface reminds us how knowledge and experience are constructed actively on the base of fragments. If there is one certainty in his work, it is that of movement, but also that of the exercise of gazing of spectators who have to shape their active position when what we are shown is defined in relation to other possible shapes. Like those who explore the process of creating internally, Rafa Forteza assumes the procedural by understanding that the work must open up towards a certain fascination with the enigma, open up to new possibilities of sense, as a result of which spectators’ route through the exhibition, like a kind of science of behaviour, is fundamental.

With regard to colour, it is more and more decidedly non-naturalist, although – paradoxically – at the same time increasingly real, more true to the fluorescent present in an ever more computerised world. Meanwhile his sculptures come close to the conception of the Hélio Oiticica’s penetrables, co-existing with a painting that emerges from space and relates to architecture as it founds that space. The space between works is therefore a place with time, an aesthetic, labyrinthine experience in their relationship to sensations. Hence the importance of the fact that many of Rafa Forteza’s works can be placed and situated in different ways, leaving that option to the receiver. And that many sculptures are set opposite his paintings, dialoguing with them, fusing into a fortunate symbiosis. Because deep down, this is a dance, a proposition of flight. Something like an abstract garden.

More than a journey, what is proposed in this exhibition is an immersion. The experience of the rest. Rafa Forteza assumes the fragments of a vision that can only be discontinuous. Forteza’s paintings, sculptures and engravings are an inner landscape, because there is nothing more impenetrable than the insinuation of a face. The paintings and the faces of his sculptures are interrogative, low-key enigmas and intimate constructions; free, but rigorously contained, like a rumour hidden behind a mask.