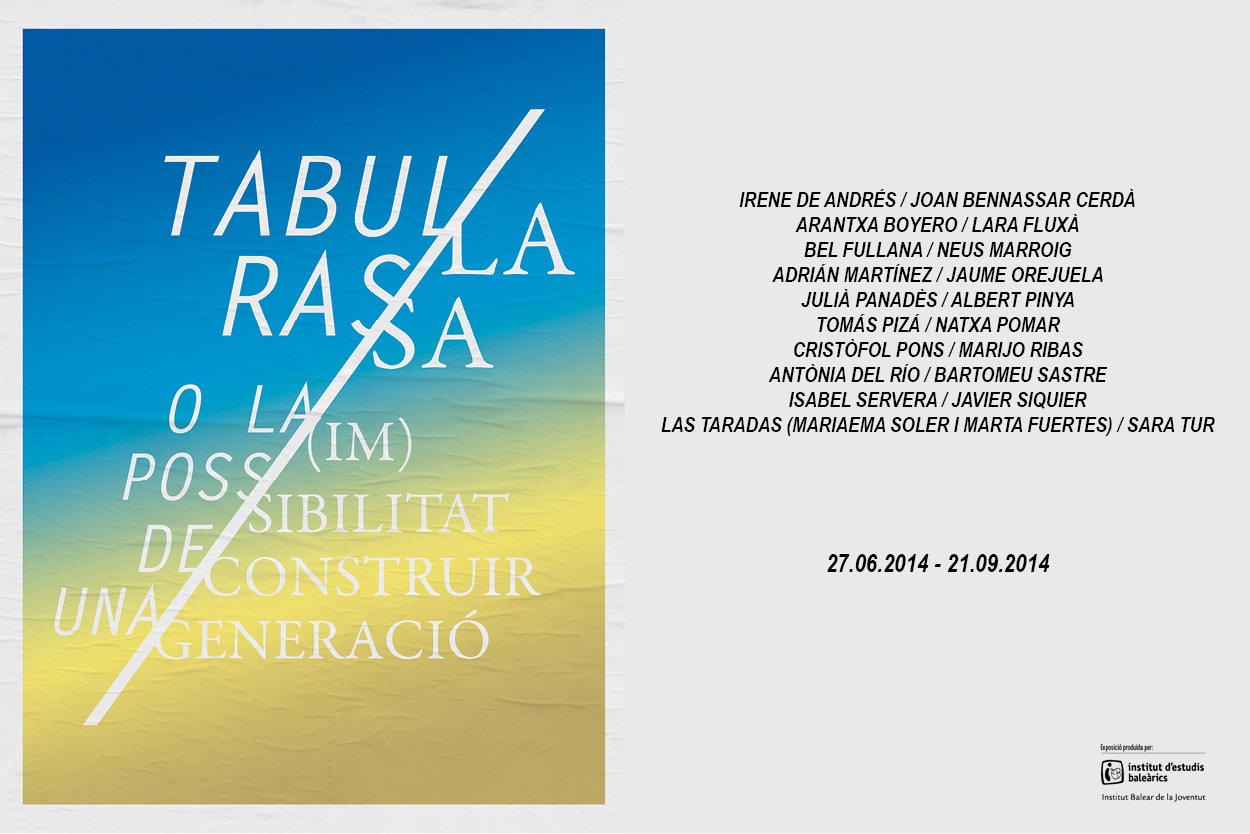 Tabula Rasa or the (im)possibility of building a generation

Every generation is entangled between the legacy of what it has learned from the previous generation and the need to create its own rules, a new vision of the world, a will to make its own contribution. In the art world, the transition from one generation to the next one frequently implies remarkable changes in artistic production, encouraged by the very market structure and the critics. This shift brings about power struggles, as explained by Pierre Bourdieu: “On one side the dominant figures are to be found, who want continuity, identity, reproduction; on the other one, the newcomers, who seek discontinuity, rupture, difference, revolution. To «make one’s name» means making one’s own mark, achieving recognition (in both senses) of one’s difference from other producers, especially the most consecrated ones.”

Thus, the generation of emerging artists can only observe its artistic practice from a perspective that allows freeing oneself of the burden imposed by tradition and the models that have shaped it, rethink the surrounding reality, art and their own artist status from scratch. With different models, experiences and wishes, we can see the works by young creators under the prism of tabula rasa, the sheet of paper that one writes on when it is blank or, following John Locke, the foundation of knowledge from experience. Nevertheless, artists do not create from scratch, the weight of history and influences prevent the sheet from being completely blank. The tabula rasa is, hence, more of a stance-taking, a wish to start something new. The fact of belonging to a generation is a complex notion as well: what shared features are there in a group of artists born in the same geographical area and in the same decade? Possibly less than we would expect, since we live in a hyperconnected world, in which physical and mental mobility can allow any individual to receive very diverse influences. Then what is a generation and what contributions can it make?

Tabula rasa or the (im)possibility of building a generation is a project curated by Fernando Gómez de la Cuesta and Pau Waelder the aim of which is to examine and present on an international scale the production of the young generation from the Balearic Islands. This selection of works by twenty-one artists born from 1981 onward on our archipelago provides an illustrative overview of the creative strength of a generation that grew overcoming the fact of living on an island and opening themselves to influences and connections from around the world. A generation of artists that give contemporary art a voice in our islands and have reached such a level of excellence that it allows them to confront themselves with the international art scene.

The project is structured as a series of collective exhibitions to be held at Es Baluard Museu d’Art Modern i Contemporani de Palma (Mallorca), MUU Kaapeli (Helsinki, Finland) and Hilvaria Studios (Tilburg, The Netherlands). A book has been published and an emerging artists’ archive has been created, available on the website tabularasa.iebalearics.org, which is the documentation and circulation core of this proposal.