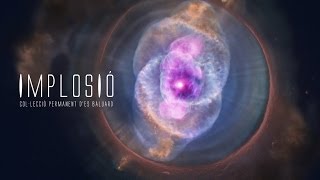 Immersed in a fundamental renovation which coincides with its tenth anniversary, Es Baluard first and foremost wishes to construct itself as a museum and bestow personality on its different spaces, improving zonal circulation and progressively shaping functions in accordance with their properties and sense. As a result, with “Implosió” (Implosion),we begin to work on the genesis of what will be the epicentre of its future strategies, strengthening the reproduction of stem cells on the basis of its collections as a new way of understanding the history of Balearic creation and its international relations with polyhedral visions. This intra-impulse is an internal detonation designed to give rise to a shock wave which shakes states and ideas from the inside, causing the generation of a fissionable nucleus. As in physics, a shock wave forged from the entrails themselves liberates large quantities of energy by way of a cathartic and reinforcement phenomenon as, when something implodes, the atoms become closer to one another and increase in density.