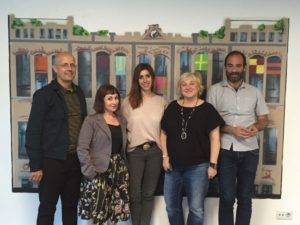 On 6 June, the meeting of the jury committee in the Casa Encendida in Madrid was held to evaluate the winner of the fourth production grant for the creation of the DKV-Es Baluard videography. The jury (from left to right) is composed of:

At this meeting, the jury has decided that the winning project of this year's scholarship is En la oscuridad brillante of the artist Fermín Jiménez Landa. With this recognition, Jiménez Landa will receive the scholarship, which has a value of 5,000 euros and its results will be exhibited in Es Baluard from November 2017.

A total of 82 projects have been presented to this fourth edition, among which the jury has chosen Fermín Jiménez Landa for the quality of the proposal, which is consistent with the open line in these audiovisual grants.

The project En la oscuridad brillante of Fermín Jiménez Landa (Pamplona, ​​1979), is a working proposal on Lisca Bianca, an uninhabited island of the Eolicas archipelago that will be associated with the idea of ​​fictional disappearance, tourism and the concept of island as Political and geographical boundaries.

The jury makes special mention of the proposal of Anna Moreno Adaptation for its integration of interdisciplinary collaborative processes.