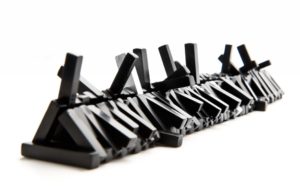 The Es Baluard's shop shows, until 27th February 2017, the latest creations by Mar Sánchez (Toreno, León, 1963). It's within the programme "Design and Innovation in the Balearics". Sánchez studied Design of Volume at the School of Arts in Zaragoza (Spain), graduating years later in Jewellery Design School of Palma de Mallorca, where she won the Thesis. In 2011 performed the Master of Contemporary Jewellery Braincelona.

In 2006 and 2007, she was awarded with second prize and first prize respectively in the Joia Mediterrània Balears and in 2013 was finalist in ArtFad and Enjoia't in Barcelona, in 2015, Alliages Choice Award in Joya Barcelona and in 2016 selected as finalist in Legnica, Poland.

She has exhibited in several Spanish cities like Palma, Mahon, Barcelona, Madrid, Tarragona, and Oviedo among others, as well as in France and Germany, where she has participated in group exhibitions.

Convinced that jewellery is a way of art, she experiments with all kinds of material, escaping from the stereotypes of traditional jewellery. Her works are small sculptures with functionality. Close to minimalism and conceptual art, her artwork is inspired by both nature and in architectural and urban forms.