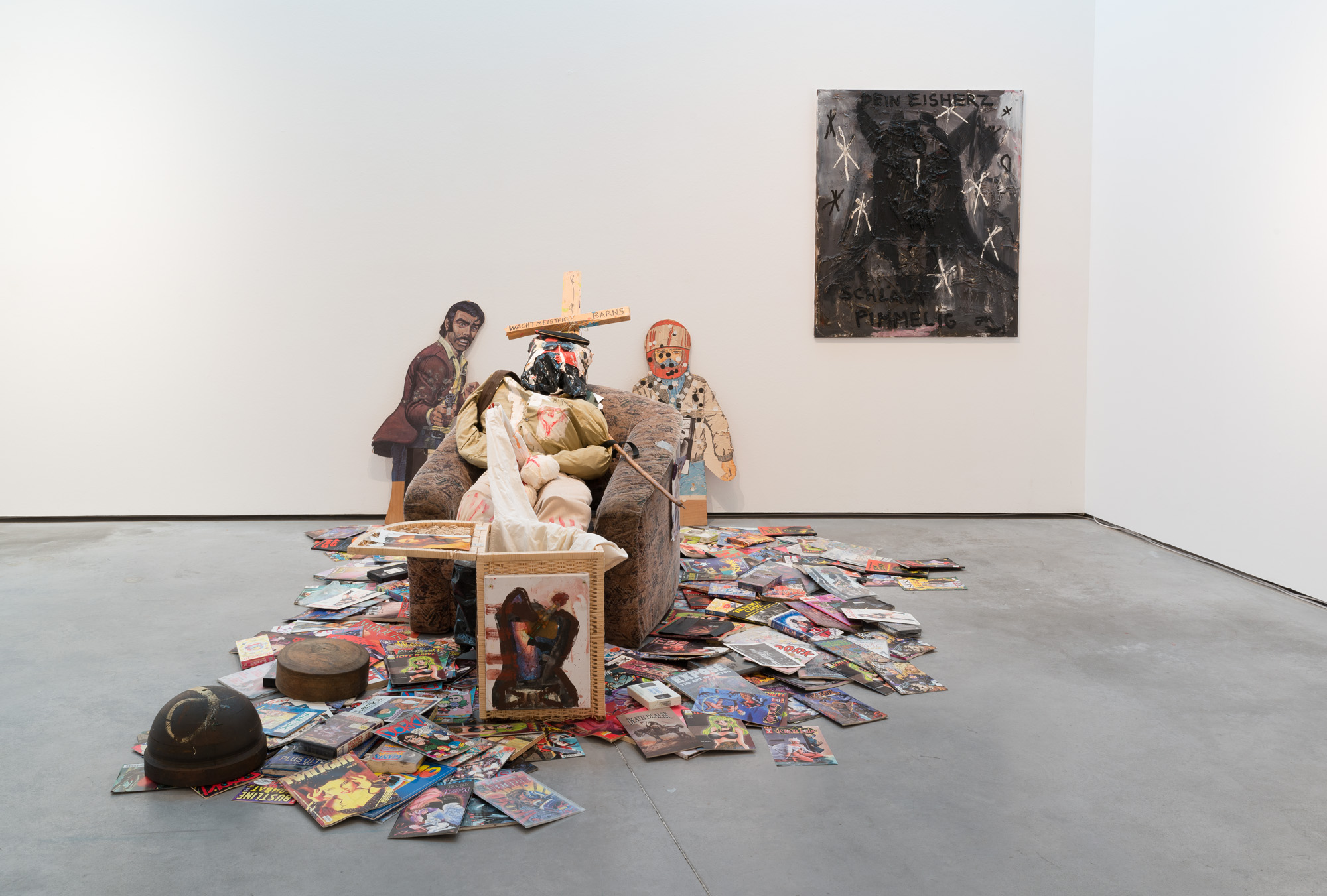 In the installation Wachtmeister Barns (dein Milk is Hot), acquired for the Es Baluard Collection in 2011, Meese combines several junk elements like comics and firing range figures, as well as a mannequin transformed into an officer or policeman with sunglasses, Wachtmeister translates literally as “patrolman” or “police officer”. It was also an Austrian and Swiss military rank of non-commissioned officers during and until World War II. Referring to history and post-war Germany, Meese appropriates this name and presents a figure surrounded by wastefrom the communication and leisure society, perhaps insinuating that the figure presented is actually the sergeant of junk culture.

A prominent member of New Actionism, Meese is also influenced by German expressionism, a movement marked by the horrors of World War II and social discontent. This artist’s oeuvre has always had a provocative intent and a significant sense of urgency. Ever since his early days, Meese has both seduced and irritated with multidisciplinary projects (sculptures, installations, performances) in which anarchic abandonment is mixed with heavy doses of absurd humour and psychosexual energy. His now-consolidated career is characterised by dense, dissonant installations, full of all types of detritus and elements from popular culture. Underlying it there is always the intention of stirring up the foundations of false truths regarding what power and desire truly signify.

Artist biography
Jonathan Meese lives and works in Berlin. He studied at the University of Fine Arts in Hamburg where from the outset, he displayed a special talent for effectively combining textures, colours, unorthodox materials and inappropriate images. He coincided there with his contemporaries John Bock and Christian Jankowski. Other artists Meese has frequently collaborated with in his projects, like Martin Kippenberger, Franz Ackermann, Daniel Richter and Albert Oehlen, also passed through this same institution before him. This university was key to the artist’s training, not only because of the connections it enabled him to make with other creators, but also because of the exhibitions organised there; during the period when he studied there, exhibitions by Mike Kelley and Paul McCarthy could be seen, making a strong impression on him. And this was also where Meese made an in-depth study of the writings of Friedrich Nietzsche, who would later become an important reference point in his subsequent work. His time at the university was therefore vital for the shaping of the bases that would constitute his work as a mature artist.   I.A.