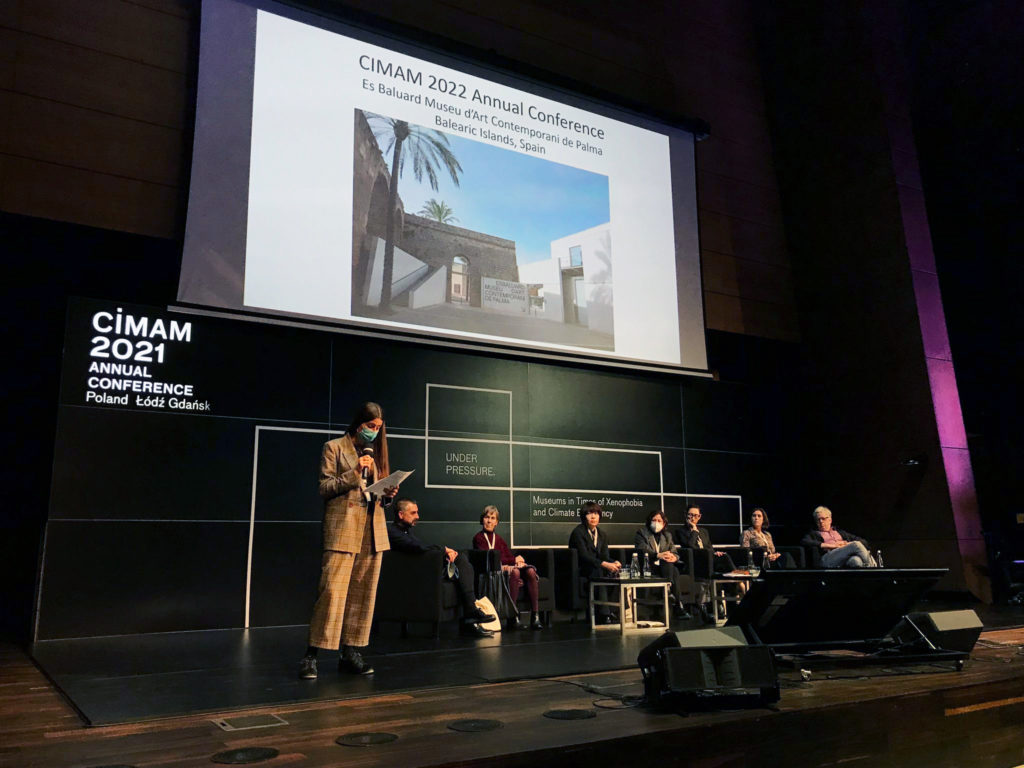 Es Baluard Museu d'Art Contemporani de Palma will host CIMAM's Annual Conference in November 2022, coinciding with CIMAM's 60th anniversary and the election of the new President and Board Members of this Committee.

The Museum's candidacy was selected among proposals from different cities worldwide and was announced during the CIMAM 2021 Annual Conference, held in Poland from November 5 to 7.

The candidacy presented by Es Baluard Museum articulates from a proposal based on the three lines of research that reinforce the identity of the Museum. These are: "Collection. Archive and Visual Memory", "City. Art and Communities" and "Imaginaries and Visualities". At the same time, the lines are crossed by all the current issues that are part of our contemporaneity, such as feminism, migrations, or the environment and its location, in the mediterranean between Africa and the Middle East.

In her speech in Poland, yesterday, after the announcement of the reception of CIMAM in 2022, the Director of Es Baluard Museum, Imma Prieto, thanked the Board of Trustees of CIMAM for having assessed "so positively" the proposal of the Museum, as well as the support received from public and private institutions.

"First and foremost, museums are spaces that generate knowledge and activate the critical spirit, which is why the conference has become the most suitable structure for nurturing and sharing the exchange of ideas, goals and needs, with the sole aim of nourishing our societies from the premise of their own plurality and diversity, and in order to face up, together, to the transformations that the future urgently requires”, she added.

Mami Kataoka, CIMAM President and Director of the Mori Art Museum, Tokyo, Japan, declares: “The pandemic has shown that it means a lot for us to come together physically in one place, learning from the country's history and the region. The CIMAM Annual Conference has always been a place where every one of us has been reminded that we are part of a broad planetary museum community”.

“From the Government of the Balearic Islands we congratulate the whole team of Es Baluard Museum and we welcome this news with the happiness of having accompanied the Museum in this call to make it the world capital of contemporary art. We believe in the role that Es Baluard Museum plays in society and we will continue to work alongside it on more projects", explains Miquel Company i Pons, Minister of European Funds, University and Culture of the Government of the Balearic Islands.

The president of the Consell de Mallorca and president of the Board of Trustees of Es Baluard Museum, Catalina Cladera, described as "great news that Es Baluard Museu is the next headquarters of CIMAM, a milestone that implies that Palma, Mallorca and the Balearic Islands become thus in world cultural and museum capital and international reference". Cladera also recalled "the effort and work of the Museum both to weave a network in Mallorca and the Balearic Islands and in terms of external projection"

“We are very pleased that Mallorca, after Barcelona, is the second headquarters in Spain to host this international conference, which will be a meeting point for professionals in the field of museums from around the world and is an important opportunity for to the projection of the Museum towards its own future”, explains the President of the Executive Commission of Es Baluard Museu, Josep Mallol Vicens.

“We believe that being the headquarters of CIMAM responds to the attractions and the artistic context that the city of Palma has. We are sure that this meeting will enrich the collective intelligence as well as the gray matter of the city”, explains Antoni Noguera, Deputy Mayor for Culture and Social Welfare of Palma City Council.

In this sense, the Museum defends a sustainable organizational model highlighting how the infrastructures that characterize the Balearic Islands allow holding an annual congress with the minimum ecological footprint, one of the best-connected airports in Europe, and access to other spaces and institutions with minimal distances.

In addition, the year 2022 coincides with the contemporary art event Documenta and the Venice Biennale, which can facilitate the connection of Palma with other European cities and thus reduce travel.

CIMAM is a worldwide network of experts in museums and modern and contemporary art and is part of ICOM (International Council of Museums). It has existed since 1962 and aims to raise awareness of the importance of museums and their contribution to society, respond to the needs of modern and contemporary museums, and generate debate and encourage cooperation between art institutions and professionals at different stages of development around the world.

The organization has over 600 members (museum directors, researchers, and curators) from 72 countries. Since 1962, they have organized 53 annual conferences in more than 30 cities around the world.